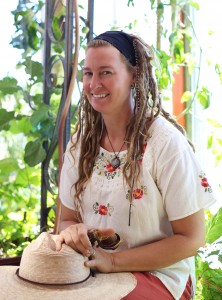 Amanda is the director of Ampersand Sustainable Learning Center. She and her husband Andy built their home off the grid in the Cerrillos/Madrid area of NM and it grew into a demonstration site for sustainable living.

Amanda’s professional background is in ecological restoration. Her passion for this work comes from a deep love for the workings of ecological systems. An early commitment to discovering harmony between human systems and ecological systems led to an exploration of organic agriculture and permaculture while she was still a teenager.

Amanda is proud of her work with the Center for Biological Diversity, Arcosanti, and the San Francisco League of Urban Gardeners. She feels privileged to have studied under the guidance of John and Nancy Todd, Fritjof Capra, Barbara Kerr, and Steve Baer.

At this point Amanda’s favorite accomplishments are embodied in the land of Ampersand Sustainable Learning Center where she has lived for the last decade. She designed and helped build an excellently functioning off grid passive solar house that reclaims waste water and grows food. She has guided the development of the passive solar techniques and appropriate technologies on site, having designed and directed the construction of nearly all of the systems that keep people fed, clean and appropriately temperature moderated on site.

She has been teaching about land restoration and organic agriculture since the mid 1990s, and about passive solar design, permaculture and appropriate technologies for the last eight years. She appreciates the rain and sun and earth through the way she lives her life. Sharing this with others is her greatest joy.

Amanda also consults. Click here to learn more about that.

I write, make music, take photographs, hike, putter about, and generally enjoy life. Professionally, I’m a manager which, I agree, sounds horrible. But what I do is design, organize, and oversee the running of various systems. In the past these have been things like a job training program for folk coming off welfare and the IT department of a San Francisco non-profit. Currently I run the distribution for the Santa Fe Reporter, a free weekly in northern New Mexico. And help out at Ampersand, which I co-founded.

But how did that co-founding thing happen?

Somewhere around the year 2000 I realized that none of my skill sets (which include rock climbing, snowboarding, all terrain biking, etc) had anything to do with any of the basic needs. You know – food, shelter, water – the list. I decided to rectify this situation. Fell in love in the process, but that’s a different (closely intertwined) story.

In the summer of 2002 I found myself stacking strawbales and smearing mud plaster on them at the Lama Foundation just north of Taos. It was awesome. That fall I went to Coquille, Oregon and studied cob building with Ianto Evans and Linda Smiley. Also awesome.

A year and a half later, walked out of a realtor’s office with a (short) list and very fortunate timing. We loved the first land on the list and it seemed to like us ok. Got it, in so far as land can be got. Put up a yurt. Then we thought (more or less) “What next?”

Soon after, Ampersand was born.

So what is the central thing of Ampersand, what’s the driving narrative?

For me it’s this: You are a part of the world. You. Me. Everyone. We are all simultaneously part of variously scaled interconnected and nested systems. We are environment to various micro-organisms and bacterias (without which we could not live). We exchange carbon dioxide for oxygen with plants. We participate in local and non-local economies. We promote various species (house cats, for instance) and decimate others (wolves). We influence the world in myriad ways – damming rivers, employing various agricultural methods, importing plants (apples or potatoes) and introducing animals (horses or cane toads) – and our influence is profound. Sometimes it is destructive, sometimes not, but it is deep and widespread and it goes both ways. The world also profoundly influences us.

The point is, we are part of a larger, complex ecology. Regardless as to our own personal religious, spiritual, or metaphysical inclinations, our entanglement and mutual participation with the world is a fact.  Ampersand helps people realize this fact physically, intellectually, and emotionally. We do it by playing with systems that relate to core needs. Water, food, shelter. And meaning. Because it looks like meaning is essential for us. Choosing how to participate adds greatly to meaning in one’s life.

It has done so to mine.